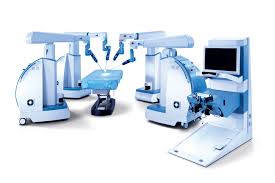 ROBOTS have been giving surgeons a helping hand for years. In 2016 there were about 4,000 of them scattered around the world’s hospitals, and they took part in 750,000 operations.

Robotic assisted surgical tool is also known as grape. It is present in the OR. Doctors are testing how the DA Vinci surgery system functions. The innovative system is planned only for minimally invasive operations. It is painstakingly delicate operation.

The surgeons are in total control and ready to act if there are complications. Robots can peel and stitch the skin of the grape back together. This system is used for everything from cardiac surgery to treating ovarian cancer. Grape skins are only fractions of a centimeter thick. Surgeons use the device to be able to work effectively inside patients’ bodies using keyhole surgery rather than creating bigger incisions that leave scars.

Da Vinci itself has four arms, three of which carry tiny surgical instruments and one of which sports a camera. The surgeon controls these with a console fitted with joysticks and pedals, with the system filtering out any tremors and accidental movements made by its operator. By using this robot, the surgeon looks at a 3D video of the area being operated on at a large console and is able to complete procedures where the surgical hole is less than two centimeters.