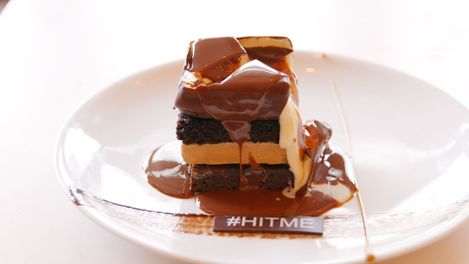 Generally most of the restaurants like to have that one amazing and unique dish on their menu which could be a hit among the people and everyone feel craziness about them. It is like the plus point or USP of their restaurants.

But Catch which is a seafood spot with locations in Manhattan, Los angles, Dubai or many other countries takes this philosophy or trend quite literally. The USP of their desert list is popularly known as “Hit Me” which is a chocolate cake.

It is exactly what the chef want their guests to do to this towering treat that is hit it hard. It is a four story desert which has been made up of ice cream, brownie as well as cake and finally pastry.

The makers of this cake have the construction down to the science. Every layer has been prepared in the giant sheet pans, and then the slabs have been cut into perfect squares with a tool that would look more at home in the medieval torture chamber than a bustling kitchen.

These fudgy brownie and chocolate cake are both the gluten free as well as they have been roasted. Its top layer is called Klondike by the Catch which is the most impressive thing. They have freeze a tray of white ganache and after that they have cut it and dip it in the chocolate which is helpful in creating a Klnondike like bar.