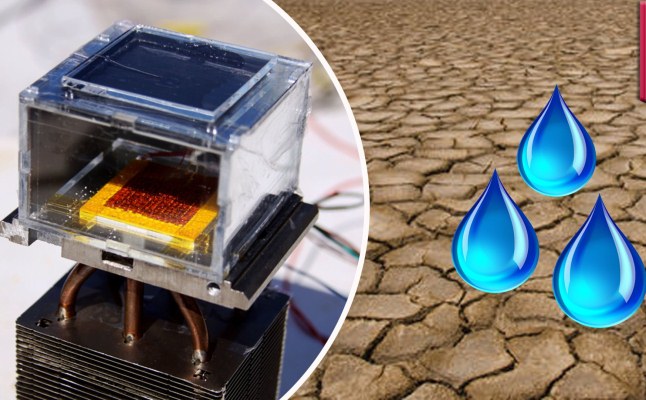 Introduction – A new device pulls-out liters of water out of air, even in climate of dry desert-like atmosphere. Moreover, it is different from that electric dehumidifier you might have streaming in your basement; it runs on the sun’s heat. If the cost of making the gadget would be low, then the system could be used to provide potable water for the millions facing shortage of clean water I developing countries and desolate regions.

Data – According to World Health Organization, statistics says one in 10 people today lack the access to safe drinking water. Almost half of the people getting water from endangered sources live in sub-Saharan Africa, and eight in 10 live in rural areas. Many of these countries can’t incur the cost of desalination even if they are nearby large water bodies. Systems that use net or canvas to harvest fog are adopted in some developing regions, but they need approximately high humidity.

The new gadget traps moisture at 20 percent approximate humidity, which is the level common in barren areas and deserts of the world. Researchers at the University of California, Berkeley and MIT reported in the journal Science that their prototype was able to extract 2.8 liters of water from the air over a 12-hour period in experiments done at 20 percent humidity and simulated sunlight. Rooftop tests approves that it do works in real-world conditions.

Vision – The system is constructed on highly porous materials known as metal-organic framework, which were originated by Yaghi. These compounds containing metal clusters related by organic molecules, significantly developed for applications such as storing hydrogen and scrubbing carbon dioxide from exhaust gases.

Company and Team – For the water-harvesting gadget, Yaghi and his team came up with a innovative MOF that has just the right balance of water-attracting zirconium units and water-repelling organic channels. The zirconium units absorb moisture, and the water droplets aligned together in the perfectly-sized and shaped pores of the MOF. Increasing the temperature little bit makes the material release the water. The researchers fill a porous copper substrate with a kilogram of the MOF powder and connected it to a graphite-coated substrate. Then they confined those pieces along with a metallic condenser inside an open-air acrylic box.

Process – The MOF collects water from air. The graphite substrate soaks sunlight and heats up the MOF, driving the water out of its pores as vapor, which gets condensed and gathered. Tests in a humidity-controlled chamber showed that the Gadget could produce 2.8 liters of water at low humidity. The MOFs are made from cheap raw materials, and the device shouldn’t be too expensive to make, Yaghi says. To get the gadget ready for commercialization, he is now working on innovative MOFs that could hold more water by weight, while Wang is trying to increase the device efficiency and output.