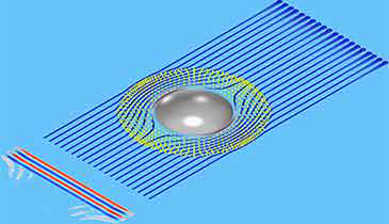 A metamaterial device has been developed by the team of researchers of Yonsei University in Korea and Hokkaido University in Japan which is helpful in transferring much better normal sound between water and air.
These findings of researchers have been published in many newspapers and review letters in which the researchers have described their device as well as its procedure such as how it works and all kinds of ways which it needs for its improvement.

Generally listening underwater sound from the air above is impossible as well as it is true in reverse. This is because of a sound barrier which has been formed by acoustic impendence in which the sound waves bounce off the barrier and along with this, it prevents them from escaping. So, a metamaterial device has been applied to the barrier by the researchers, which is a metasurface.

It works as a tunnel between the water and the air essentially as well as allows more sound waves in order to pass through. In order to make the metamatrial device, a cylindrical metal outer shell has been built in it that looks like a car tire rim a lot.

For keeping it taut, there is a rubber segmented membrane in its centre with a weight so that the device can float on water. By the help of this, the sounds can be heard from below the surface by a person who is hovering over it in the air which is not normally audible.

Usually, 0.1 or 0.2 percent of sound waves has the ability to penetrate the water or air barrier but by their new device, the researchers have found that the sound transmission can be increased by it to the extent up to 30 percent of waves.

This device has the potential and ability to be used for human communication theoretically between people under water and above of it. Along with humans’ sound listening, other sea creatures stirring below can be heard too. But at the same time, there are two major drawbacks that will be the reason of limiting its use.

In which the first drawback is that it has the ability to pass through only sound waves which come directly below from it and diagonal waves have been still bounced away by it. The second drawback is that it only works for a definite and limited range of frequencies which is from 600 to 800 Hz approximately.

This device will be very useful for the scientists for further researches as well as for common humans who are working or related with water. Furthermore, testing and experiments will be conducted for its utility as explained by the researchers and their colleagues.