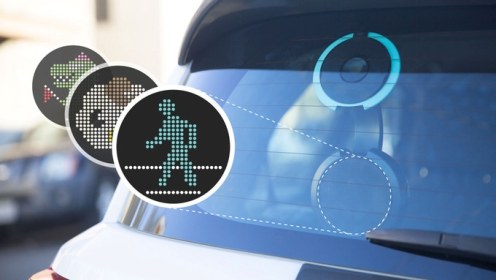 The world’s first car device has been developed which allows you to communicate with the other drivers with the help of animation named as CarWink.

It is the device that essentially provides a fun as well as interactive platform in order to connect with each other.

It has been designed with the both form and function in mind as it set out to break the boundary between the vehicles by way of using the simple and pure communication methods.

In order to provide the best range of options as well as convenience to the users, the control can be activated through the voice control or onscreen touch input. Gone are the days of rude hand gestures, sailor mouths as well as reckless driving. There is a total of 469 RGB LED along with 11 white LED into the design.

Through the CarWink’s hands free voice control, drivers would be able to use a wide variety of emojies in order to communicate with each other. This device has been developed beyond the prototype stage and it could change the types of interactions between the drivers.

If you want to give a signal of accident ahead, it will be very helpful also in giving the gratitude for the lane change. It is the solar powered LED device which could be stick right onto the back of the car.

You can also send the messages by the CarWink to the driver behind you. It also includes the street signs such as pedestrian crossing, accident ahead, fun emojis like thumbs up or a wink on those rare occasions when someone is letting you pass on the road.