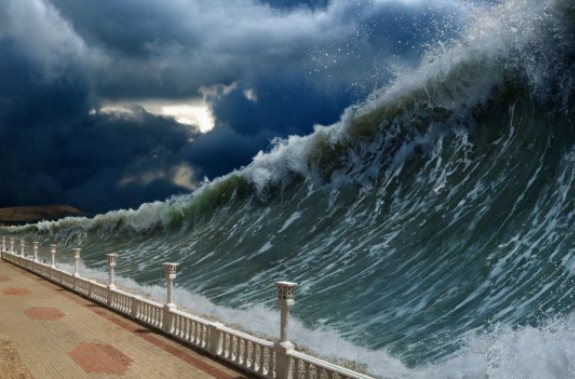 When there is sudden rise in the heat of the earth surface, large ocean waves are caused which are known as tsunamis. This occurs due to generation of earthquakes in a subduction zone. A research has been conducted which measures the statistics of last two decades, shows that most of the loss of lives are due to the happening of Tsunamis. Even after this huge destruction, there are no measures taken to stop the tsunami. But scientists from top universities have recently discovered unique and interesting mechanism so that destruction can be stopped.

According to them, this great disaster should be stopped before it will reach to Earth’s shoreline. At the oncoming mass of water, tsunamis could be stopped with the firing of sound waves coming from the deep ocean. For the prevention of lives of the people which is triggered by natural disasters like landslides, earthquakes, and other violent geological events, using acoustic gravity waves is the great option discovered. These sound waves are so natural which helps to move the deep ocean with the great speed of sound. These waves are moving thousands of meters below the earth’s surface. These waves are very long with a distance of 10- 100 kilometers.

These naturally occurring sound waves can measures hundreds and thousands of kilometers in length. There are certain life forms like plankton; they are not able to swim against the current generated from the water. These waves act as a treatment for their movement and ability enhancing for finding food. It is also found that there should be the existence of other waves which helps to trigger the incoming tsunami by reacting with the waves for reducing its height and amplitude which causes the energy consumption over the larger area. There are cases when the tsunamis reaches the shoreline, damage occurred to the civilians and the environment can be minimized from the reduced height of the tsunami.

For the complete dispersion of tsunami from the environment, the process of firing AGW’s need to be repeated on the continuous basis. This destructive disaster of tsunami generated in the Indian ocean in the year 2004. This happens after the immediate destruction of earthquake with the magnitude of 9, which is recorded as pone of the dangerous natural disaster in the recent history of various countries. It causes around 2, 30,000 deaths in 14 countries.

For the usage of AGW’s, environmental engineers are required to construct accurate frequency modulators or transmitters. It would be a great challenge for engineers. They can also use nature’s natural processes against itself, when the naturally generated violent geological event like earthquakes occurs.