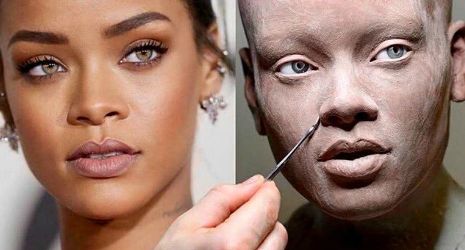 There is a German based artist Edgar Askelovic who are famous for making hyper realistic sculptures of the celebrities and one of his popular work is a Basquiat themed sculpture for Rihanna’s 30th Birthday.

When Pop star Rihanna tu7rns 30 so to celebrate, this artist has presented the American singer a sculpture of herself. In this sculpture, the singer is nude as well as wearing an American football helmet which is inspired by Jean-Michel Basquait’s art.

In order to complete this sculpture, he took five months even though it was a six step process. This piece of clay is finished with silicone in order to give the sculpture a fleshy texture.

According to him, this sculpture is realistic as well as similar looking to his subject as possible. He is much known for making life like and life sixe realistic sculptures from silicone as well as polyurethane resins.

He is fond of experimenting with several styles, size and materials as well as uses his hands for his entire art world. He always wants to present something which makes people admire.

His every art work is containing a different story. This series of Rihanna consists of three amazing variation of the same sculpture of the singer who are wearing an American football helmet.

it is a symbiosis of Rihanna and Basquiat. He also included Rihanna’s tattoos in making the sculpture but he has interpreted them in the style of Basquait. According to him, it was really enjoyable part of the work process.