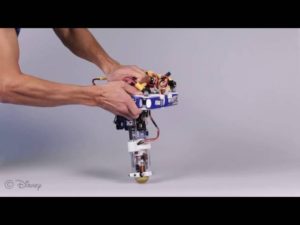 In Disney’s continued quest to breathe life into all of its cartoon characters, it might be going beyond a mere costume. The latest invention from Disney’s research division can hop around on one leg without the need for a tether to prevent it from falling over, although a cable is visible in the video which is presumably used to deliver a continuous supply of power.

Rob is an endearing robotic invention from Disney Research, and seen by many to be a nod to the Tigger character from the popular Winnie the Pooh series. In terms of the design, the voice coil is flanked by compression springs on both sides. This is the most agile and friendly bot that make use of dual servo motors. It results in 19 bounces in only 7 seconds of time. It is like a pogo stick come to life.

The robot’s single leg uses a technology called a linear elastic actuator in parallel—or LEAPS, for short—which employs both an electromagnetic actuator, as well as two compressions springs. The position and real-time adjustments made to its leg are handled by a pair of standard servo motors, and in its current form it can hop around for up to seven seconds before toppling—or roughly just as long as Tigger can hop on his tail before crashing into something.