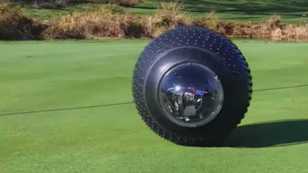 GuardBot Inc is a robotics company based out of CT that designs a wide array of robots and drones for the sole use of aiding American forces, whether it is any branch in the military, police, special operations, or government agencies.

GuardBot is actually a spherical, amphibious robot with many potential uses for broadcasting, reconnaissance, or security. It was developed by a Connecticut-based company of the same name. Though it began as a potential bot for missions to Mars, it is now being tested by the United States military to possibly assist in future patrolling duties.

Two clear payload domes peek out on either side of GuardBot, or the instrument inside can vary depending on the needs of the user. It features two onboard high-definition cameras that can be independently oriented and can live stream video. Night vision, motion sensors, and laser scanners are all options that can be added to GuardBot. It is also able to sense chemicals used for explosives, which would alert humans to proceed with caution in the area.

This is a guard robot. It is a surveillance robot that can run on any terrain. It can even swim through water. It comes in various different sizes from 5 ft. to 7 inches in diameter. It has a battery life that lasts 25 hours on one charge. It is mainly used for surveillance and fitted with two cameras, GPS and microphones. It can be controlled remotely or through satellites. Guard robot can reach speeds up to 9 mph on land and 3 mph on water. It is a bit slower in the water, maxing out at 6.4 kilometers per hour. It is still in the process of development but it could cost as much as 1 lakh dollar. It could be the future for mobile surveillance.