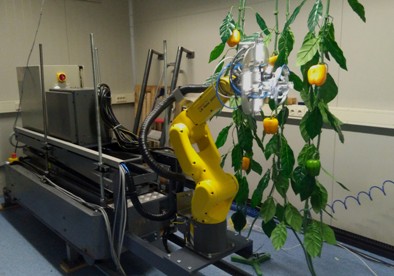 The field of robotics is gaining its popularity and importance day by day and they are replacing human in various fields and now there is Sweeper Robot which is replacing the human efforts in the field of agriculture in form of fruit pickers.

Through the creation of these robots, now there is no more risk of contamination of fruits unlike human fruit pickers. These pepper picking robots run on a rail system across the greenhouse and contain a snake like arm with pincers. In order to harvest the pepper, it uses camera for finding a pepper.

As soon as the target has been identified, it analyses the colour to tell if it is ripe. After that, it starts to begin to move its articulated arm. It uses a series of efficient images for directing its movements until it has grasped the fruit and removed it with a retractable cutter.

Researchers have been working on this robot from many years which could harvest the cucumbers and tomatoes and they have conduct work on sweet peppers in their research. This robot which is developed by the researchers is able to pluck ripe peppers. It performs this task with efficiency and profit driven world of modern farming.

These green fingered robots look like the miniature tractors and can be controlled by a central computer unit which is able to keep track of their position, orientation and speed along with status and directs them in real time. It is equipped with GPS, geographic information systems along with continual sensing which allow them to navigate their environment and carry out precision task.