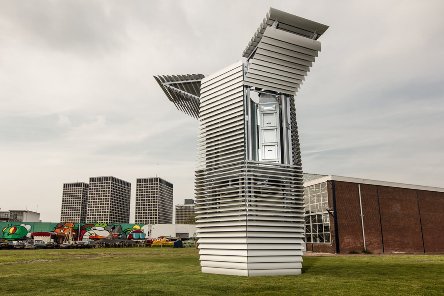 The SMOG FREE TOWER is a part of the larger SMOG FREE PROJECT by Daan Roosegaarde in order to reduce the pollution as well as provide an inspirational experience of the clean future.

It includes SMOKE FREE TOWER, RING and BUCYCLE which are able to provide a local solution of the clean air in the public spaces. Through this technology, the government, students along with clean tech industry and also people can work together in order to make a whole city smog free.

The efforts of the Roosegaarde for bringing people and nature closer in an effective manner gave the opportunity for more projects such as Dune 4.2 which is an innovative landscape located along side the Mass river in Netherland.

This tower has been described as the world’s largest air purifier, which have used patented ozone free ion technology in order to clean the air.

According to the designers, they use positive ionization as you we have smog particles that are tiny like the hairs as well as 14 times smaller. We can see or feel them as well but it can cause a lot of damage. W e can hit them with the positive ions.

This performs on the nano level which is 1000th of the millimetre. The smog particles can become positively charged and after that we achieve a negatively charged surface. The designers have not used the filter system as do not capture smog particles as well as it uses a lot of electricity.