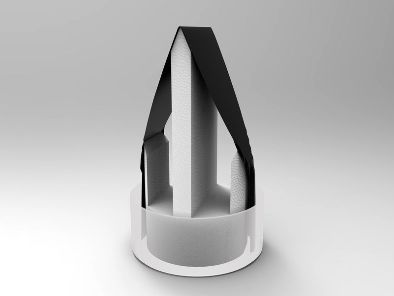 Worldwide, some 850 million people lack access to clean drinking water. Contaminated water transmits a huge variety of diseases, including cholera, dysentery and typhoid, causing more than half a million deaths a year.

Researchers developed a solar water purifier they hope can sanitize water more quickly, cheaply and effectively than other models.

“Solar energy is basically free,” says engineer who led the research. “In some countries in tropical areas, they are short of resources but they have an abundance of solar energy.”

The design looks more or less like a small A-frame tent. Black carbon-dipped paper is draped over a triangular form and set on top of the water. The edges of the paper trail in the water, soaking it up like a sponge. It’s a modernization of the ancient technology of the solar still, which uses solar energy to evaporate water and leave contaminants behind. The water vapor then cools, condenses and can be collected. Gan’s team improved the design of the solar still, making it more efficient by giving it a sloped shape—this keeps the paper cool, since light hits it at a slant instead of directly. Since the paper stays below the ambient temperature, it draws heat from its surroundings, which makes up for the loss of solar energy during the vaporization process.

The device can evaporate about 2.2 liters of water per hour for every square meter of paper hit by the sun. This is more efficient than other solar-powered water purifiers, reseracher says.

Researcher and his colleagues have set up a company to commercialize the technology. Their prototype can condense and collect between 10 and 20 liters every day in full sun conditions. As the average adult woman needs about 2.7 liters of fluid per day and the average man needs about 3.7, some 80 percent of which comes from drinks, the still could in theory provide enough daily drinking water for a family. The estimates will cost about $200 and will be available within a year or so.

Lead engineer hopes the device will be cheaper than similar technologies developed in recent years, many of which rely on expensive nanomaterials. Scientists have created a tiny water filter using “nanoflakes” of molybdenum, several companies have been looking at using nanocellulose for water treatment. In contrast, the solar still uses inexpensive and widely available carbon paper.

The device can be used on any kind of water surface—a lake, a pond, a trough, even the ocean. But how it works will depend on the setting.

For example, if the still is used on the ocean, salt will eventually accumulate on the surface. This and other design challenges are still being worked on.

The still can remove nearly 100 percent of bacteria, viruses and organic compounds like arsenic, Gan says. It does less well with certain volatile chemicals, including certain pesticides, which are evaporated up with the water rather than left behind.

“It looks like it has some serious promise to it,” says Desmond Lawler, an engineering professor at the University of Texas at Austin, of the system.

Lawler says one major consideration will be the humidity of the environment where the still is used. In very humid conditions—think the Caribbean after a hurricane—it’s much harder to evaporate water. The team will need to take this into consideration when designing systems for specific locations.

Though he doesn’t imagine the system being a substitute for more permanent clean water sources, Lawyer says he finds the simplicity of the system promising.

“A small-scale system that could create drinking water for a family,” Lawler says. “It’s very exciting to think about, particularly for emergency situations.”