Third Thumb That Can Changes View About Prosthetics 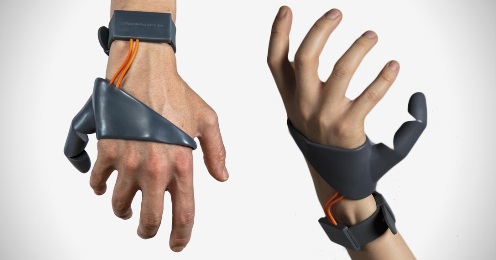 In order to change the way of the people about prosthetics, the London based product designer, Dani Clode has designed a Third Thumb as he believes that prosthetics are able to extent the ability of persons.

So it should be considered as the replacement to a part of the body. This Third Thumb has been made from a series of interconnected parts such as a hand piece, an attachment, cables, and motors as well as two Bluetooth controllers.

It can strap on to the side of our hand and then it is connected to the bracelet which is containing the wires and servos. By using the pressure sensors which sit under the soles of their feet, it wearer can control it.

If the one foot is pressing down by the wearer, then the thumb will make a grasping movement along with the instructions which can sent to the wrist unit via Bluetooth.

It can sound like a bit fiddly but people can pick it up immediately according to the designer. It is not more difficult in comparison to steering a car or operating the brake or accelerator at the same time by the user.

It is a prototype which aims at reimagining what we think of as a prosthetic. It is something that adds capabilities instead of replacing those lost.

You can actually tell it what to do with the pressure sensors which are placed under the soles of your feet.