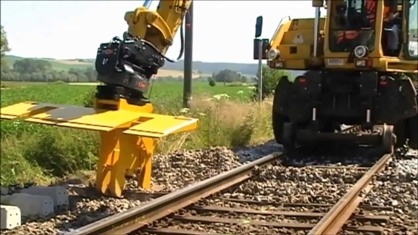 A machine has been developed for the job of replacing the old sleepers or tiers on the railroad named as RBS Sleeper Changer.

This new sleeper changing unit has been equipped with the integrated ballast shield which offers the additional option of bolt-on ballast buckets which can be used in order to extract the ballast from in between the sleepers as well as place it next to the track.

It contains many efficient features in which the best design features is the special holding valve that can function as the safe grip mechanism even in instances in which the pressure drops.

The plunge depth of the shield can be adjusted. The overall process is efficient, safe as well as most important to this kind of work precise.

The sleeper has been grabbed with the mounted hydraulic gripper as well as it can then be pulled out of the bed from the side. The grab has been equipped with the 360 degree endless rotation.

It can be handled by the opening the hydraulic gripper as well as it can clamp the sleeper. It contains a special holding valve which guarantees the secure retention of loads in the case of pressure drops.

The ballast shield of the tool has the other option of bolt-on buckets which can be used to push out the ballast from in between the sleepers as well as it can also shovel it out and place it at the designated place.