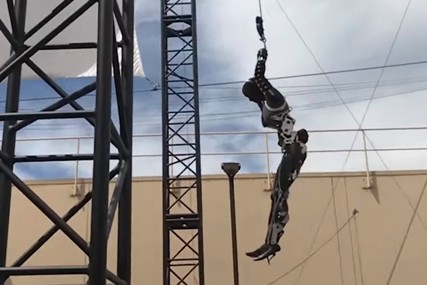 A cutting edge stunt robot has been developed by the Disney’s team of engineers which is able to flip and soar through the air just like the traditional human acrobat. It is developed under the project “Stuntronics”.

Though the execution of the flips, it is impressive. It is 90 pounds Stuntronics which are decked out with the onboard sensors and help the robots in making acrobat decisions in the moment as per the Disney.

It has the capability of mid air posing which elevates the performance along with the bots more carefully in deciding how to stick the landing. It knows very well when to tuck its knees for performing a somersault as well as when to pull its arms in order to twist.

In addition to this, it also knows when to slow down it spins in order to make sure it sticks the perfect landing according to the company. Most importantly, these kinds of robots can achieve a level of accuracy as well as precision with the jumps that would be complex for their human counterparts.

This Stuntronics technology by the Disney is the successor of the Stickman which was a Z-shaped robot and introduced earlier by it. Like the Stickman robot, this latest version is using an accelerometer, gyroscope as well as an array of the lasers in order to perform the stunts.

This project has created human resembling robots in order to serve as the stunt doubles. Many amazing acrobatic techniques have been developed by the human performers over many years of gymnastic arts and at the same time, robots are started for becoming more mobile and autonomous.