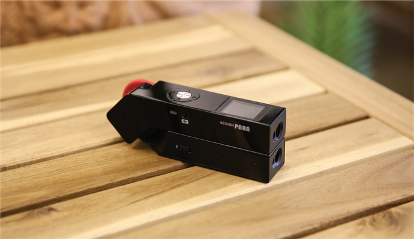 An advanced and versatile laser measure has been developed named PARA which can enhance accuracy and ease for the user. Efficient engineering is used in laser and wheel modes which allow the users to remain stationary at the time of making measurements.

Through this innovative system, we can measure both the metric and imperial systems as it is equipped with a laser and wheel mode which are depending on the type and size of the job. It is the amazing tool to add on our toolbox. Particularly, it is a Pythagorean laser measurer which takes use of two lasers and an angle encoder.

Most of the tape measures generally a pose of hassle or they can measure only the distance between the device and end point of the laser but PARA is eliminating all these limitations. In its laser mode, it is able to measure the distance between two laser points and they can also be attached to the tripod in order to increase precision and convenience.

Now tall buildings and surfaces can be easily measured which are out of reach along with curved surfaces can also be measured with ease through the wheel mode. There are three simple steps in order to use it which is as follows: