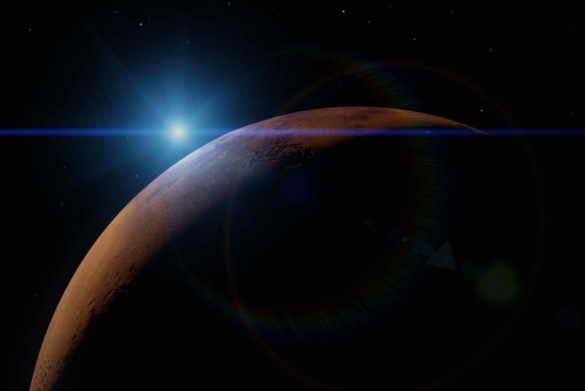 Introduction- NASA is an organisation who researches and works on the activities of space from long period of time and recently when the engineers have sent their newest orbiter on Mars to find the key features and reasons behind the loss of planet’s atmosphere to space over a particular of time. The orbiter or the name of mission was MAVEN which means experts.

Research- This time they have worked a lot on the machine to reveal the cause behind the atmospheric change. The mission was launched on November 16 from the NASA’S Mars Atmosphere and Volatile Evolution laboratory. The return of orbiter disclosed the fact a new process through which the solar winds can penetrates in depth of the planetary atmosphere.

Scientist and researchers are able to use this first comprehensive method where they have learned and developed to measure the composition of Mars’ upper atmosphere and electrically charged ionosphere. While researching they also came to know that the extraordinary sight of ions whenever they acquire the energy that escort an escape from the atmosphere.

The researchers shared that they are able to now understand what lead to atmospheric loss and they are capable to understand the links in a chains which has started with the solar-driven procedure that are working on gases on the upper most layer of atmosphere.

Analysis- During the orbiter was on space they were getting constant images that were helping them in understanding the process of atmospheric change. Further researchers described the process of MAVEN that revolved around the layer of ions or can say orbiter immersed in ionosphere along with the electrons that were stretching about 75 to 300 miles above the surface. The layer around the Mars protects it from many high energy particles from sun, wind that blow from sun and very hot and intense stream. It acts as a layer of shield for the planet.

Process- While developing the orbiter researchers realized that MAVEN needs a Solar Wind Ion Analyzer that can discover a stream of solar wind particles for measurement as Mars has a boundary of invisible ionosphere. Further their interactions lead to transformation of stream from charged to neutral form. While these transformation of these ions they characterized the pristine solar wind, a new way to identify and track the properties of solar wind.

They had in built the Neutral Gas and Mass Spectrometer in order to explore the first comprehensive analysis of composition of the upper atmosphere and ionosphere. The analyzer has detected many gases in bulk in ion and neutral forms. The introduction of these chemical and physical factors has opened the door of research in the field of physics and chemistry. Another important fact for measuring the atmospheric loos is the presence of “polar plume” that determines and helps in measurement.