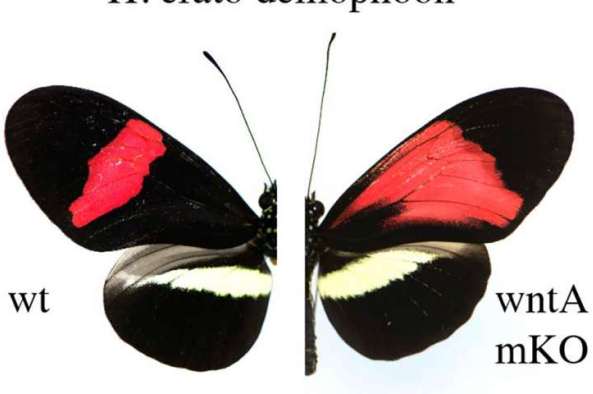 Butterfly is a common species. Most of the scientist research differently on butterflies which give variant results. A unique research has been conducted which shows that there can be a single control in the DNA of seven different butterfly species. A single gene helps to influence various diversities of the wing patterns of butterfly from the nature. The wing patterns of these butterflies are different and unique. The basic evolution of these butterflies are highly diversified with a strong shape defined by natural and sexual selection.

Genes of different individual species helps to define the process of generation of these butterfly species. Huge and powerful effects are created when a single gene is sued repeatedly throughout the whole development process. The protein generated from the butterfly species is conserved molecule. This protein is known as WntA. During the development of insects, it is considered as a part of their small family of genes which helps to influence different body plans and patterns.

Protein molecules generated from different species of butterfly creates a code that also acts as diffusible signals. A cell known as Morphogen helps in establishing positions having different specialized cell types present within a tissue. It also helps in the creation of chemical basis. Genetic code of these species describes the instructions for coloring the wing of butterflies. Deleting some of the instructions made the process complex and difficult. This happens due to the change in different networks of genes that creates the dropping effect on the colors and the patterns.

Researchers of these species done an experiment by injecting the eggs of the butterflies with the RNA probe. It is directly attached with a small part of genetic code. A gene which is known as WntA played a suspected role in different expressions of colors. Butterflies are growing after the knocking of the gene with a comparison of wing patterns of the knockout mutants with the original wing patterns. Unexpected ways and results are found from the comparison of implementation of same procedure for seven different butterflies.

WntA is considered as one of the early discovered genes which involve various patterns. They also made a prediction based on different genes. One gene is regulated with various potential regions along the gene which is actually bounded during the experiment.