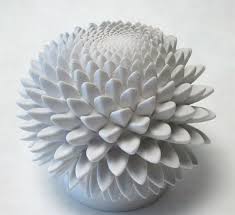 John Edmark is a lecturer at Stanford University that made hypnotized animated sculptures. These designs animate when spun under a strobe light. The main aim of developing these designs is to explore geometric patterns found in nature.

For instance, snail shells and sunflowers spiral in a special and mathematical ratio known as golden ratio. These designs are building by creating towers by manually stacking the spirals on top of each other. The artist discovered that the layers of spiral appeared to rise and fall when he rotated them.

It leads to his 3-d printed “Blooms” artwork. Each piece can take anywhere from 5-25 hours to complete. He wanted to delight and perplex his audience with this experience. He has also designed kinetic structures. Most of his works are based on mathematical formulas and theories. According to him, it is important to engage people with art with their eyes.

To make his sculptures come alive, Edmark placed them on a platform rotating at 550 revolutions per minute. He videotaped the sculptures at 24 frames per second with an incredibly fast shutter speed (1/4,000th of a second).

The camera was synchronized with the rotating platform and it snapped a photo every time the sculpture turned 137.5 degrees. This sync-up is key, because 137.5 degrees is the golden angle, or an angle that divides a full angle into a Golden Ratio.

In nature, points separated by 137.5 degrees in tightly bound spirals like those seen in a pine cone produce interlocked spirals winding in opposite directions.

Folding table that can be stored on your wall