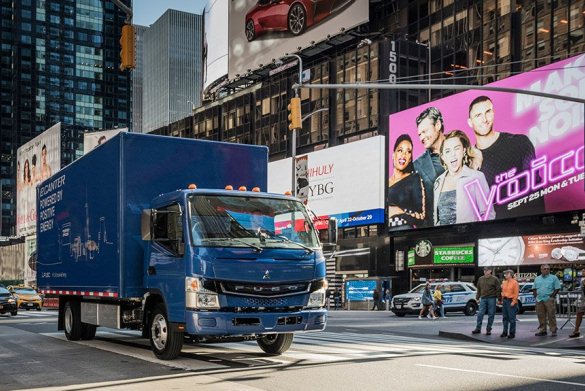 Introduction– Invention of electric cars might get many of the fan lovers, but when it comes to excluding CO2 emissions, bigger electrified vehicles will also have a significant part to play. Daimler is aims on playing some role in this green transformation, its latest step being to introduce the Mitsubishi Fuso eCanter in the US, narrating it as the first series production all-electric truck. The Fuso eCanter is the world’s first series-produced all-electric light-duty truck and will be transported to consumers starting this year in the US, Europe and Japan. MFTBC is planning to deliver 500 units of this generation to consumers within the next two years.

Larger scale production is aimed to start in 2019. Mitsubishi Fuso Truck and Bus Corporation (MFTBC) have launched the world’s first all-electric truck in series production, the Fuso eCanter, in the US. MFTBC is a member of the Daimler group.

Commercialization – “In times when everybody is talking about electric trucks, we are the first to actually commercialize a series-produced all-electric truck,” says MFTBC president and CEO Marc Llistosella. Fuso eCenter says that have been practicing customer testing for years and providing the assurance on the parts, services, and warranty through their global Fuso dealership network.

Aim – In addition, eCanter addresses the increasing global demand for products to meet high discharge standards. Fuso eCentre comes with years of consumer testing, and the assurance of parts of the services and a warranty through a global Fudo dealership network. “It offers an attractive and cost-effective alternative to combustion engines and makes electric trucks key to the future of inner city distribution”, he said.

Future Goals – To fulfill the relative need and answer to the public’s need for a zero-emission, zero-noise truck for increasing inner-city distribution. The range of machine is 100 kilometers and a load capacity up to three and a half tons, wholly depending on body and usage, makes the light duty EV suitable for city use. The vehicle’s electric power train carries six high voltage lithium ion battery packs with 420V and 13.8kWh each. Comparing the eCanter with a conventional diesel truck, operating cost savings of up to 1,000 Euro ($1,488 AUD) per 10,000 kilometers can be expected, according to FUSO.

Conclusion – The director of Fuso Truck and Bus Australia, Justin Whitford, confirms that, Australia is on the list to get this truck, with customer trials planned for 2018. They are excited about the eCenter, the first electric truck from a global manufacturer, said by Whitford. The even added that it will change the people think about electrification in the Australian filed industry. The company is presently planning to involve local customer in a trial that is planned to start next year, following on from the initial introduction in the United States, Japan and Europe.

A Survey In India’s Manufacturing Sector For...