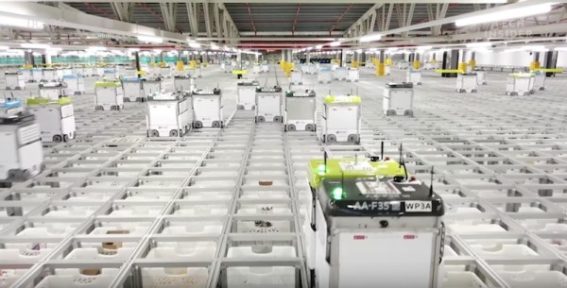 Ocado robots zip around simultaneously filling orders without bumping into each other in this fascinating look at a modern warehouse. Ocado’s new warehouse has thousands of robots zooming around a grid system to pack groceries. The thousands of robots can process 65,000 orders every week.

They communicate on a 4G network to avoid bumping into each other. It is the future of retail. The automated warehouse is best for packing grocery orders. This large industry is located in Andover in the United Kingdom. Thousands of robots work at the same time to collect the order from inside. The robots move along a grid system. It is faster, more flexible, cost-effective and lower-risk way of delivering groceries to the mass market.

It is several times the size of a football pitch. They are controlled by an air traffic control system. They have a top speed of 4 meters per second. The robots are battery operated. There are charging bays where the robots top up. These robots act as giant goods to person system. They bring crates of products to pick stations.

Robots or humans then assemble the order. The robots replace empty crates on the grid. Ocado is at the forefront of automated warehouse. The robots needed to accelerate and decelerate rapidly, reach speeds of several meters per second and stop with millimeter accuracy. They also had to pick up and carry a heavy payload over long distances and be able to run for several hours on a single battery charge.

Survival capsule could save you from natural disaster

Energy storage to its burning