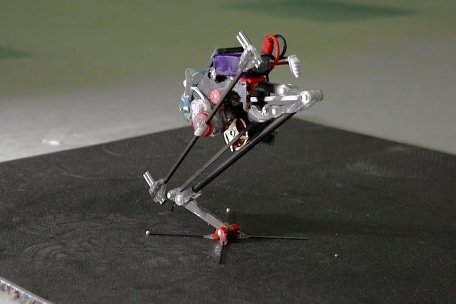 Salto -1P is a jumping root that has been made by the UC Berkeley’s Biomimetic Millisystems Lab. Salto stands for the Saltatorial Locomotion on Terrain Obstacles. This jumping robot can perform really amazing saltatorial stunts.

Salto-1P can jump up and down, back like some other animals but it can do them with attracting accuracy and speed. This robot has long legs which are 14.4cm along with 2 thrusters and a tail for reorientation. It can easily perform the maximum jump of 1.25 m and has maximum vertical jumping agility of 1.83m/s.

In order to jump, this jumping robot has the small motor along with a system of linkages and obviously gears to jump. It also takes use of rotating tail and 2 little thrusters for stabilizing as it spend little time on the ground. So there is necessity to do more of the controlling in the air for landing properly on the ground and for generating proper thrust for the next jump.

Due to this, they become able to chain together and perform multiple jumps. It successfully and consistently performed well in the number of test runs that included patterned along with random jumping sequences.