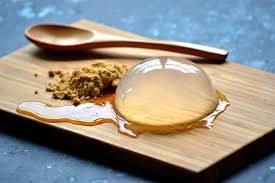 This Mizu mochi dish was created by the Kinseiken Seika Company of a Japan. It is a Japanese dessert which is also known as water cake, its appearance resembles a large drop of water. It is made up of water and agar.

This dessert is so fragile that it requires to get consumed in less than 30 minutes if delayed then it turns into a sweet puddle. At Kyo Roll En in Bangkok, they put it on a lily pad. It is covered in toasted soybean powder and black sugar syrup which adds flavor to it. it can also be served even better with roasted peanut powder.

Its traditional name is Mizu Shingen Mochi where Mizu is a Japanese word which means water and mocha means a dessert made up of rice flour. This dish is so delicate that as soon as you keep it in your mouth it will melt.