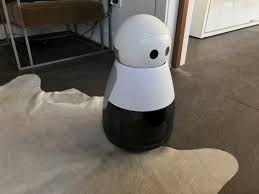 The cute home robot has camera in its eyes that allows it to see you and take photos and videos of you. Mayfield robotics first announced Kuri earlier this year. But since then, it has got some updates. One of its update is known as Kuri version.

The maker of the robot uses a different approach for a home robot. Rather than controlling internet-connected devices or answering questions about your schedule like the Amazon Echo or Google Home, Kuri’s main mission is to complete simple tasks around the house, like reading bedtime stories to your kids or following you around while playing NPR.

Also, it takes photos and videos throughout the day and you decide which to keep or delete. It is autonomous home video that understands voice commands. But to communicate with people, it uses friendly chirps and beeps just like R2-D2.

The inside of Kuri’s body was redesigned and it has a more comfortable handle. Its new wheels are more like tracks so it can roll over bigger bumps. Kuri navigates in your house using a laser sensor array that enables the robot to understand the actual location of every room in the house.

When Kuri gets tired, it can dock for a power nap. It is available at the minimum price of 799 US Dollar. It has made its debut in customer’s home in December 2017. It has the track wheels, structural updates, and an autonomous home video program.