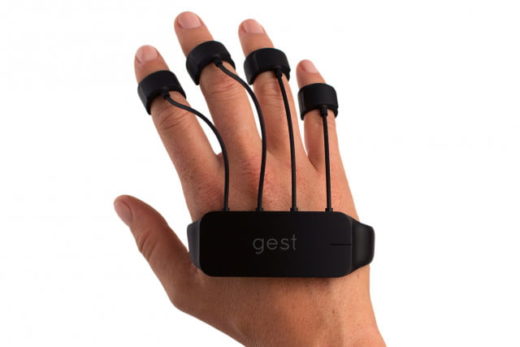 A whole new level of interaction by Gest wearable i.e. Gesture controlled wearable. Earlier interactions were only possible with the computer, and the options get either two-dimensional like the mouse or binary like the keys on anyone keyboards. But with this device, your hands get three-dimensional and non-binary and hence become your tool.

Controlling smartphone, tablet, or computer just by moving Gest, the gesture-controlled wearable. It is designed to fit around the palm of man and the cable has connected rings that slide onto your fingers. This advanced technology users gestures for detection and interprets the location and movements of anyone’s hand and fingers to perform actions like closing apps, moving the cursor and flipping through slides.

A 3D object can also be rotated by this Gest by virtually grabbing it. The unique designs and 15 sophisticated technology sensors judge and estimate the gestures precisely for any movement and thus completing the task as if it’s just an extension of the human arm, which it is.

All the gestures and movements are customizable that fits the needs. Gest’s DevKit API allows the developers to use real-time movement and position data in order to build applications that match the Gest’s functionally with virtually any kind of computer activity. The cost of such sophisticated to gesture defined machine is $149 (10,083) which May increase to $200 or $400 in future.