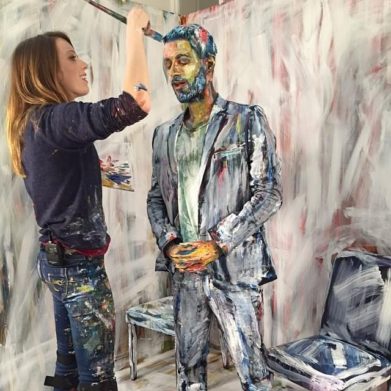 Alexa Meade is an artist who plays with color and the idea of innovation. She’s the women who invented painting the human beings turning them into a living, breathing portraits. The way she presents her creativity on humans is so mesmerizing that for an instant it’ll look like a painting hanging on the wall.

She just turns the three-dimensional objects into two dimensional with her art of painting. She calls her style “reverse Trompe-l’oil” that is instead of turning two-dimensional surfaces into three dimensional, she does the opposite.

She started experimenting with the style when she was in college while finishing her degree in political science she had an idea for her art project to develop an optical illusion for turning three-dimensional spaces into two-dimensional paintings. She perfected a way to collapse depth.

Her talent made models look flat when they are photographed. Her work has appeared in exhibits all over the world. She has also collaborated with Gotye, Avicii, and David Blaine. And this journey turned her into most popular artist around the world.