Lasers can scare hungry birds at the farm 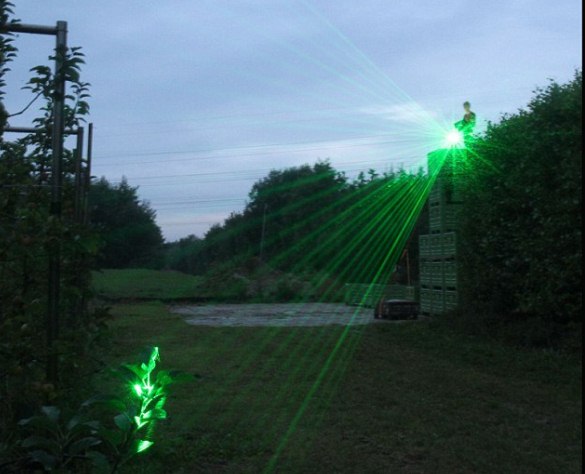 Introduction – Agriculture and vegetation is one of the very important parts of human and animal life. Living organism need food to survive, but loose all crops for the hungry birds is not appropriate. Continuous feeding of the birds over the agriculture causes so many destruction and loss to farmers. Economically this will also affect both human and animals as well as it will lead to inflation due to less productivity. There are many farmers who are losing their crops because of hungry birds.

Installation – Internationally a farm owner installed this automate laser guns in the beginning of year’s season. The land of 168 acre is installed with six Agrilaser Autonomic that are completely automatic mounted on a pedestal and aimed them at the top of the crops. The device shoots a steady green laser beam that moves across the bushes from side to side. This illusion makes the bird scared wt the moment whey find it coming near to them.

Initiative – The company who made this device have proudly reduced the issues faced by the farmers. The magnificent success by the invention of this device as well as they have maintained their companies’ standard. The group has eliminated about 99 percent of the birds in the international farms. The company’s invention took about four years to develop this laser, after testing various colours, wavelength, and beam widths.

They have worked on settling wide green beam and applying filters and reducing harmful infrared radiation. They used the colour green because they have researched and found most of the signals from the birds’ eye to the brain, so it’s perceived as more intense and is more effective then red. The company made this device which is dealing nationally and internationally around in many countries. The device is coming in use in many other places like airports and oilrigs etc. the researchers describes the use of the laser is more than 6,000 facilities worldwide, discouraging birds from alighting on food processing plants and on fishing boats.

Function – This device works on solar energy and cost about $10,000 apiece and much more facilities than one. The laser operate blindly based on programmed instructions means they can target specific birds or turn themselves on when birds come by. There are large species of birds around 12,000 and here comes one drawback of the device it is not for all number of species in the world. The device works best their work on birds that are natural predators. But few big ones are not affected by it like hawks and falcons etc.

Conclusion – Further, more research need to be done on whether it is affecting the eyes of the birds. The group who has worked on the device has no idea and have not properly identified the harm it may be causing to the animals tough everything is completely unintended.