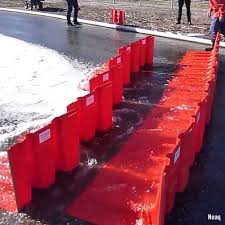 In the world of modernization, disaster is happening on regular basis all around the world. People have done various measured to prevent them. IN the raining season, Flood is considered as the frequent and terrible disaster. To control it, there is free standing barrier available in the market. They are designed by Noax box wall which is a temporary flood barrier. They are super lightweight at only 3.4 kg.

They are designed for fast response to flood threats in an urban environment, on both hard and even surfaces like tarmac, paving and concrete including asphalt streets. The barriers are stabilized by the weight of flood water. The box sections hold off water rushing in up to 0.5metre high. And after the threat has passed, they can be dismantled easily. These barriers fight the dangers of unpredictable weather conditions.

The most famous distributors serve through Flood Control International for some of the most effective, fast-acting flood-resistant barriers around. A round of tests was performed to see how the barriers would withstand flash flood conditions, and they seem to have performed rather well. Through smart engineering, the designers of the flood fighting system have designed the barrier to be anchored by the flood water that it is stopping. With quick deployment—and quick dismantling—these barriers have it all.